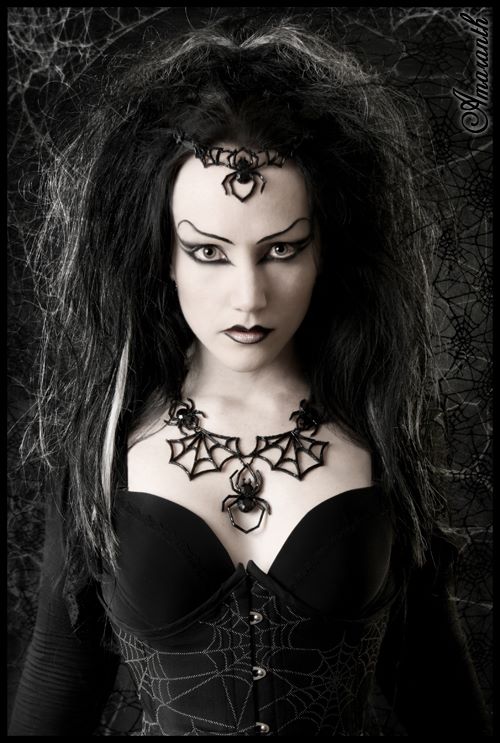 Photo is by Taya Uddin


Immortal amarant, a flower which once
In paradise, fast by the tree of life,
Began to bloom; but soon for man's offence
To heaven removed, where first it grew, there grows,
And flowers aloft, shading the fount of life,
And where the river of bliss through midst of heaven
Rolls o'er elysian flowers her amber stream:
With these that never fade the spirits elect
Bind their resplendent locks. (III, 353)


The word amaranth comes from the Greek word amaranton, meaning "unwilting" (from the verb marainesthai, meaning "wilt"). The word was applied to amaranth because it did not soon fade and so symbolized immortality. "Amarant" is a more correct, albeit archaic form, chiefly used in poetry (you may also  called it chrysanthemum or helichrysum). The current spelling, amaranth, seems to have come from folk etymology that assumed the final syllable derived from the Greek word anthos ("flower"), common in botanical names.  It was sacred to Ephesian Artemis in ancient Greece. It was supposed to have special healing properties. As a symbol of immortality, it was used to decorate images of the gods and tombs.  It was also widely used by the Chinese for its healing chemicals, curing illnesses such as infections, rashes, and migraines.

Thing about THIS amaranth is, that she is beautiful like any flower and just as timeless. Lady Amaranth has been inspiration to the whole gothic culture for years and years now. You can find her all over the internet, trough magazines, covers and ads. This 34-years old model lives in London, England and her style is mostly traditional goth but you can find medievel and fantasy elements in it too. Why I love her, is the way she always do things with style and confidence and she had stayed modest. Modesty is really a virtue in media world and I am so happy that she had the time for the interview and I am also glad how accessible she is. I think that Lady Amaranth is truly unwilting and she is an icon to remember. 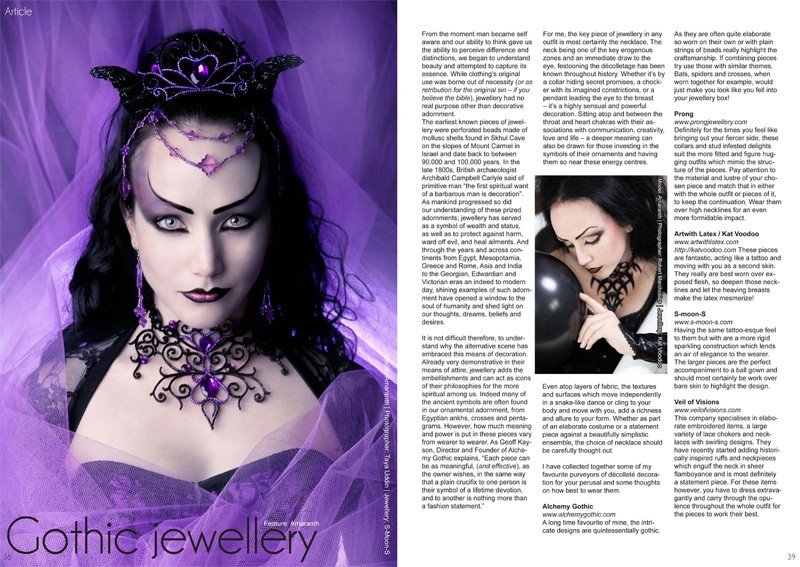 
You are one the great names in gothic and alternative culture. Many look up to you as an idol, style icon and dream be just like you. How does being famous affect you?
!You know, when I was a young goth in the scene, I would look up to the elder goths too. I think it’s natural to appreciate those who you aspire to be like. Knowing how I felt back then – shy and insecure in the presence of these beautiful fully fledged goths – I endeavour all I can to try and be as approachable and kind as possible. However sometimes I’m not the most sociable person and I do like to spend time alone – even in crowds… and being known does make this particular personality trait a little difficult. But it’s all swings and round-abouts. I appreciate my fans so much that I have actually learnt over the years to break through some of my misanthropic tendencies and tame my awkward nature to a degree. I do ask people to remember though – I’m not really “famous” or a “celebrity”, and even those that are, have their faults. People can be too quick to put others on pedestals and then equally as quick to tear them down when they don’t live up to the standards they themselves created. Simply appreciate the parts of me you like – take those and make them your own and be your own style icon", she says smiling and continue "I never mind people mimicking my style and indeed love helping people to bring to life the beautiful goth they see inside them – believe me, wielding an eyeliner is an art… and one that took me a while to master! I do also like to try and be a good portrayal of all the wonderful things about goth (where the mass media and general opinion sometimes only see the bad) and hope that is one thing that others can take from me – so we all represent the scene and its culture in the best light."

How did you became a model, is there certain story behind it?
"I always liked to take photos before I headed out to a club. My mother made a lot of my clothes and she liked having pictures of me in my outfits. I also liked to keep mementoes of the me that I created – rather than the me I had to be in school uniform etc. But I never really thought I could “model” as such. It was Nadya Lev – a brilliant American photographer – who first saw some pictures of me and asked me to do a professional shoot. Following on from that some designer friends asked me if I could take photos in their clothing. It kinda snowballed from there and I fell in love with creating the photos – especially the more fairy-tale and fantastic kinds. I always lived in my head as a child, and being able to be that witch/vampire/princess even if just for a moment was a great deal of fun and a beautiful escape from reality. However my proportions aren’t really “model material” and I’ve just become known as one through luck really." 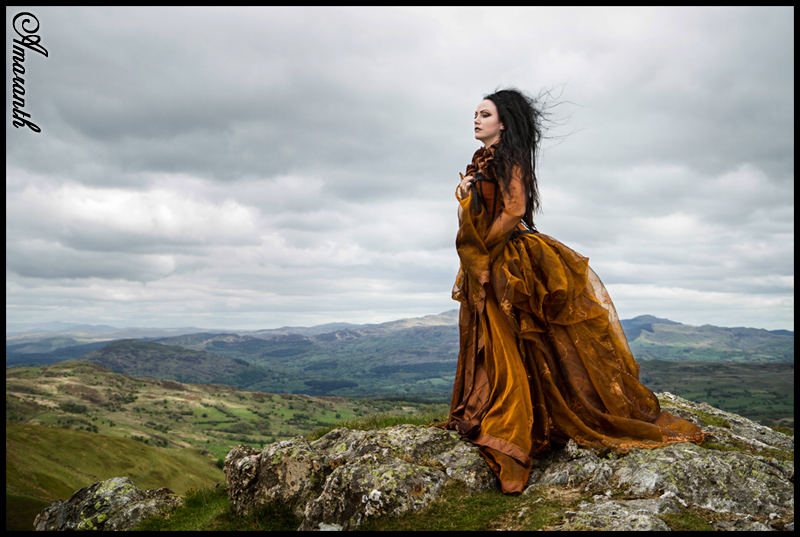 How would you describe your style and where do you find your inspiration?
"It varies from a classic 90s goth with an 80s twist, to a feminine fae-goth and a few shades in-between. I find my inspiration mainly from movies and stories, and also my fellow goths, watching the beautiful creatures at festivals such as WGT always makes me feel so inspired when I return. But a single piece of jewellery or a beautiful location can spawn a whole outfit. And these days I’m lucky to work with some amazing designers, many of whom allow me input into their designs – and between us some beautiful art is borne!"

What things has been difficult during your modelling career and how did you kept your head above the water?
"I think the strangest thing for me is coping with the attention. I was never one of the “popular” crowd growing up, it was only when I got into the goth scene I started coming into my own – and then later to be hailed as an icon… it was a huge ego boost and one which I didn’t always manage gracefully. On the flip side I also got a lot of negative attention from people who wanted to drag me down. I had to learn to take all opinions with a piece of salt and keep true to myself and continually thankful for all the wonderful opportunities I have gotten as a result." 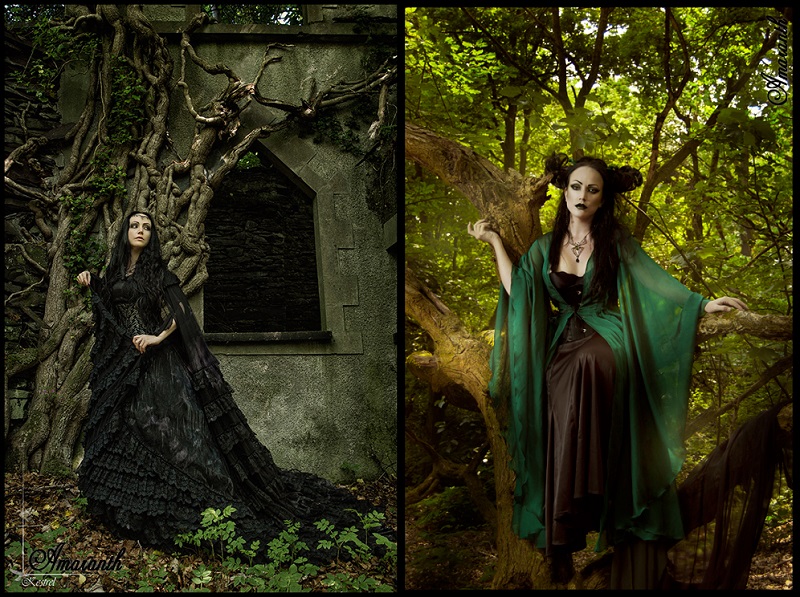 We all have bad days some times. Do you have any tricks to make you feel better when you feel sad or not as confident as normal?
"During those times I like to spend time alone and retreat into myself. I’m quite an analytical person so when I encounter a real wall of sadness I like to try and figure out what is the root cause and see how I can go about life to try and make things better in future. When general nameless malaise washes over me – which it does from time to time, I just like to take time out from the world, listen to music, watch movies and sleep… recovering my soul for the next onslaught of reality." 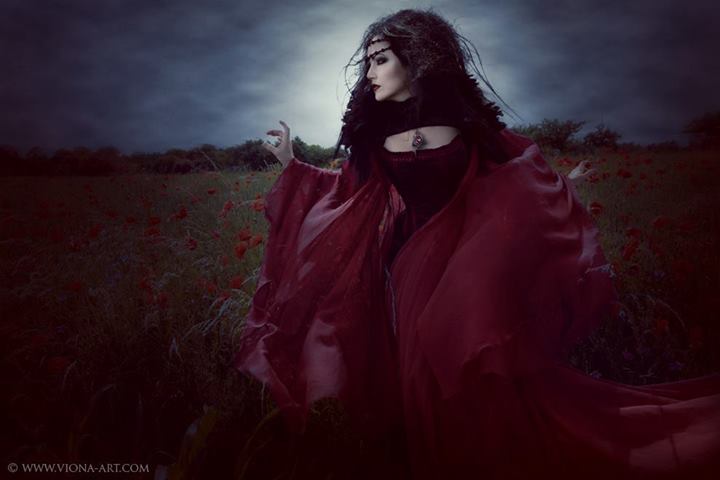 What do you think about the beauty standards these days?
"Beauty is really difficult thing to define. For example in many walks of life I may not be considered beautiful yet in the goth scene I am. It’s very much a personal preference thing and essentially we all create that definition ourselves whether we like it or not. I am very much into creating beauty and having beauty around me as I define it… it’s especially why I adore the goth scene... because I think almost anything and anyone can be beautiful no matter what they were born with - there’s an art to it which you can make your own. But it is an art and takes practise and talent – which is kinda nicer to admire than simply how well someone fared in the lottery of genetics."

You always seem to look your best, how do you keep yourself in good shape?
"Well that’s certainly not true, it’s only that the best pictures end up online of course. And generally those are pictures which have been staged with great lighting, angles and outfits. As for being in good shape, I’m afraid that’s also not true – especially as I get older! However as I age I become better at putting together outfits which accentuate my best features and improving in the artistry of flawless makeup – so I think that’s what’s helping me negate the signs of aging", she say this with little with sparkle in her eyes.

Tell us something about your childhood and how you were like growing up.
"I grew up in a wonderful little under-developed town in Richards Bay, South Africa. There weren’t many houses there at the time, and loads of Veld to play in. I was a bit of a solitary wild child and loved climbing trees and exploring the bush with my black German Sheppard (who I was not much taller than!). When I did play with others, we would spend much of the time in swimming pools pretending to be mermaids". She smiles and I can see the little mermaids in my mind.


You seem to have achieved many things already. Now we need to know what dreams do you have?
"I’d like to have a house and a garden… we currently own a flat in London, but I do long for more space and an outside."
Tell us your 5 best beauty/style tips you use
1.      Use moisturising cream daily, all over the body and especially the face and neck.
2.      Make sure you know your body and your best/worst bits and choose your clothes accordingly.
3.      Put outfits together with thought, if you’re bringing in colour in an item, make sure you echo it somewhere else too and use accessories wisely. Also make sure your make-up and hair carries through and is not an afterthought.
4.      Invest in a good foundation and a quality brush and learn how best to apply it.
5.      Use lots of blending and shades with eyeshadows. 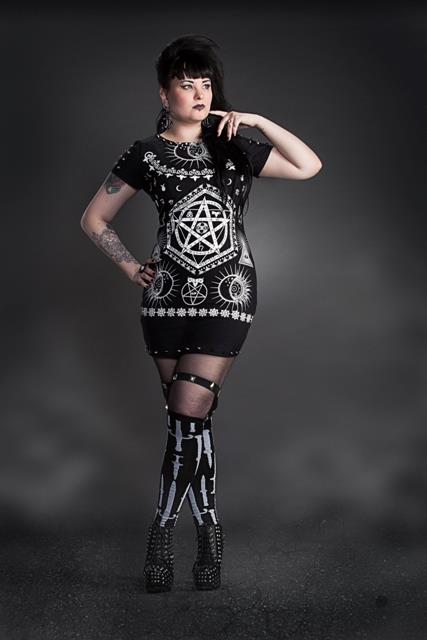 Translation:
I am up becoming Underground model and I am hoping for you to vote me by liking my picture on Facebook. We all are so different, it will be very exiting to see who will win! Our group to owner, other models, our mentor Pixie, to hair and make up people, oh I am so happy to know them all and we had such fun on our semifinal photoshoot. 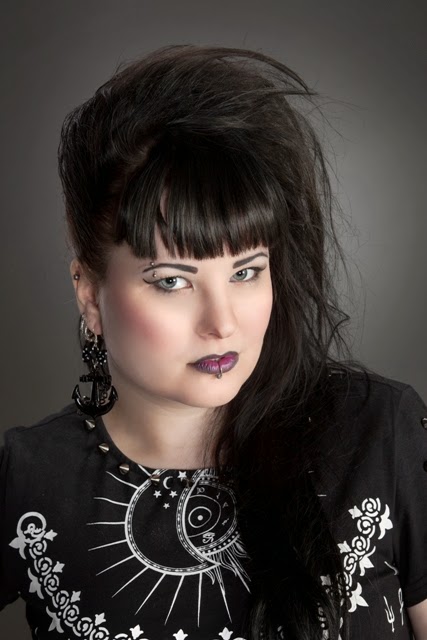 And here is couple behind the scenes pictures where I am with Saija and Nita. 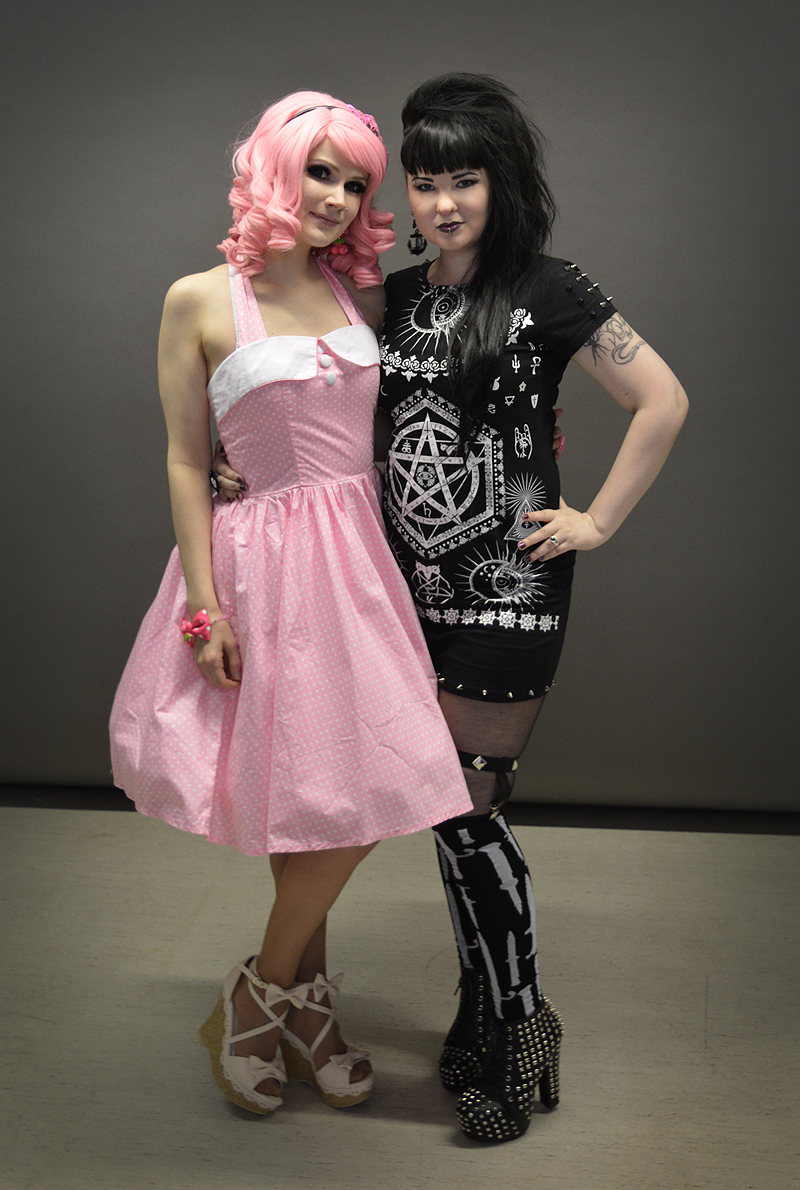 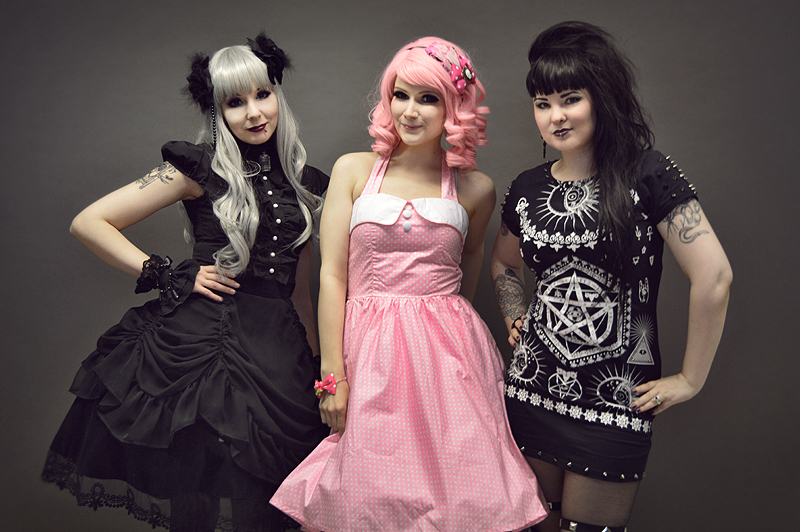 Kohteen lähettäminen sähköpostitseBloggaa tästä!Jaa TwitteriinJaa FacebookiinJaa Pinterestiin
Tunnisteet: Me as a model, Pictures of me 2014 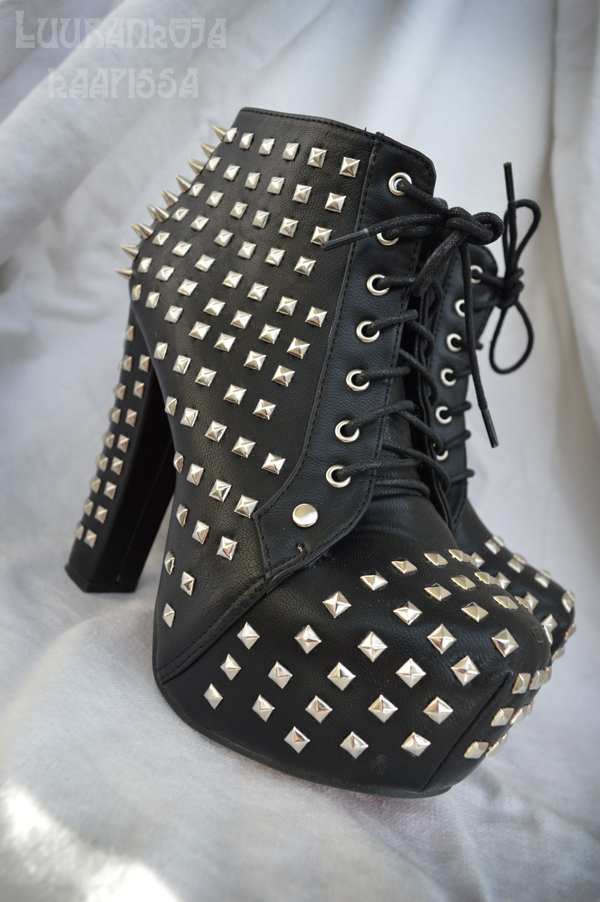 Translation:
I finally have my new camera and I am using most of my time just taking pictures about everything. It is so cool to take pictures that are already clear and I have all new drive to be blogging again. The shoes I bought from my friend, they are originally from Denmark and these are my first these kind of (Lita) shoes. And I think I still have my rivet love going on.. Soon I don´t have single pair without them haha. And can´t but love the red bottom. 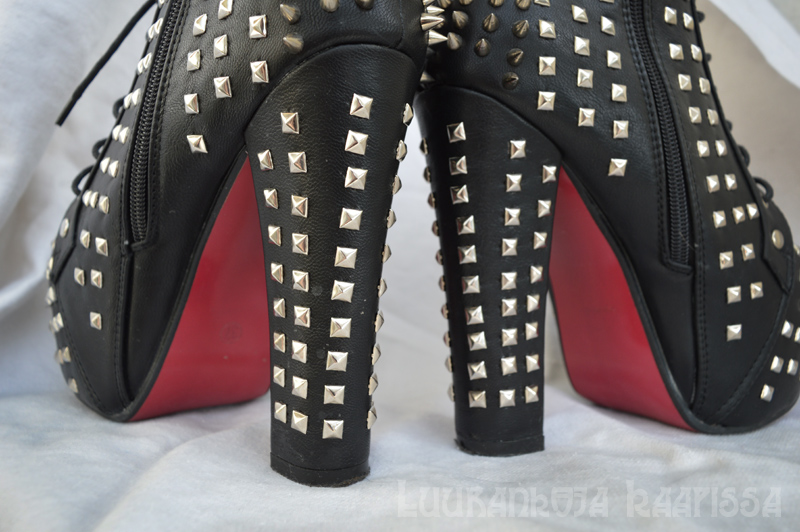 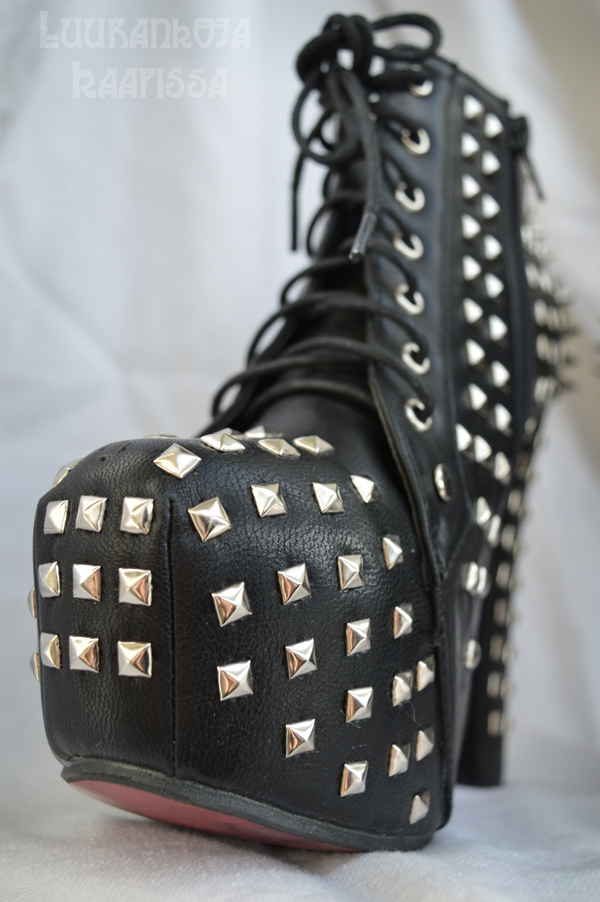 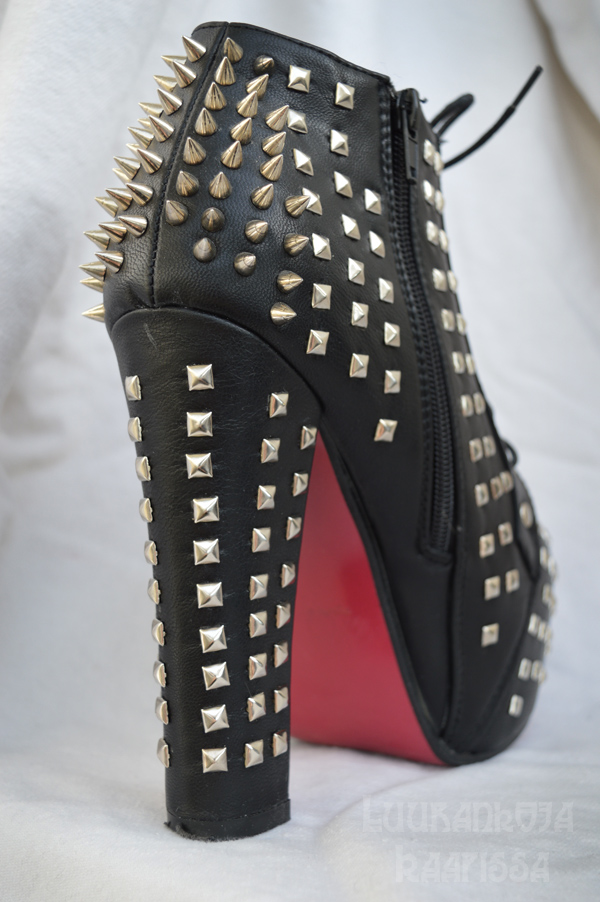