"I'm a slightly gothic nerd and a designer who lives in Helsinki with two hairy creatures: a guy and a cat.  This blog is my little corner of the internet, a place to share my visual tales – tales about cats, everyday life, design, drawings and DIY-projects. "

Inspiring pictures, art, style and good feel about the blog. Great look over all. Best part for me is the art, wish there were more art! (such a great artist omg!) 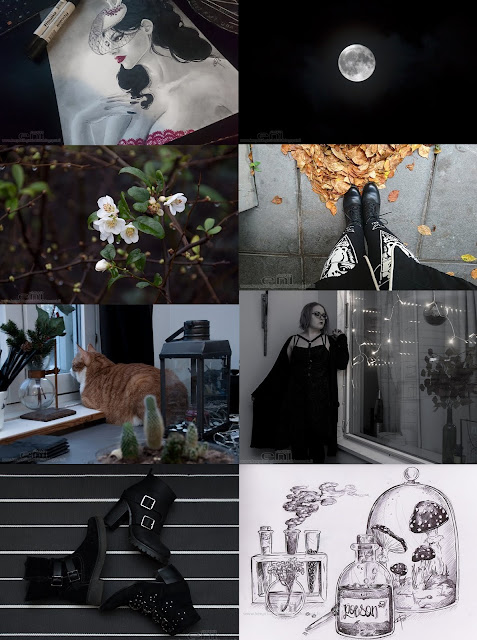 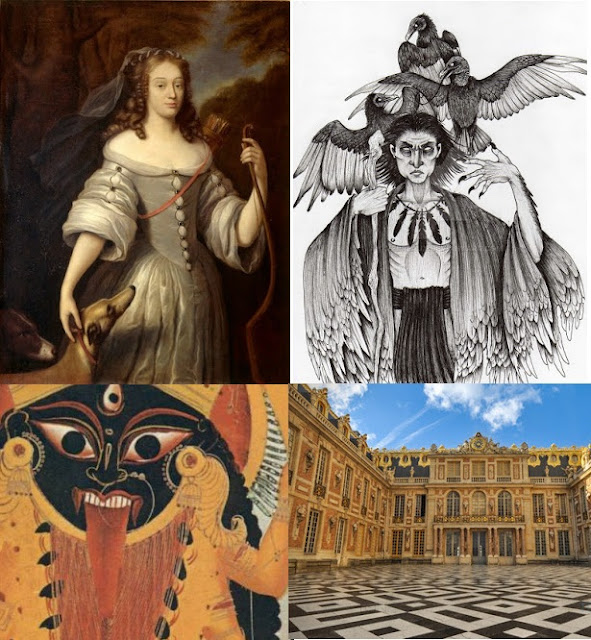 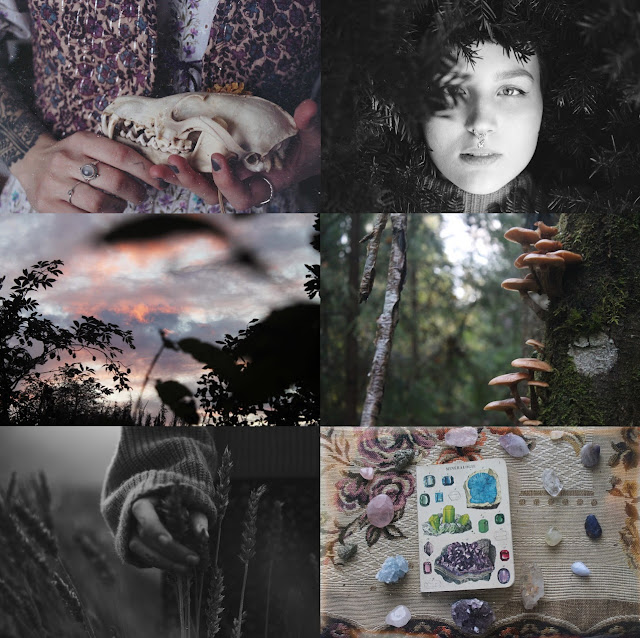 Go traveling with Lilly, check out awesome new make up pictures and just be wowed. I am so inspired about the style too. 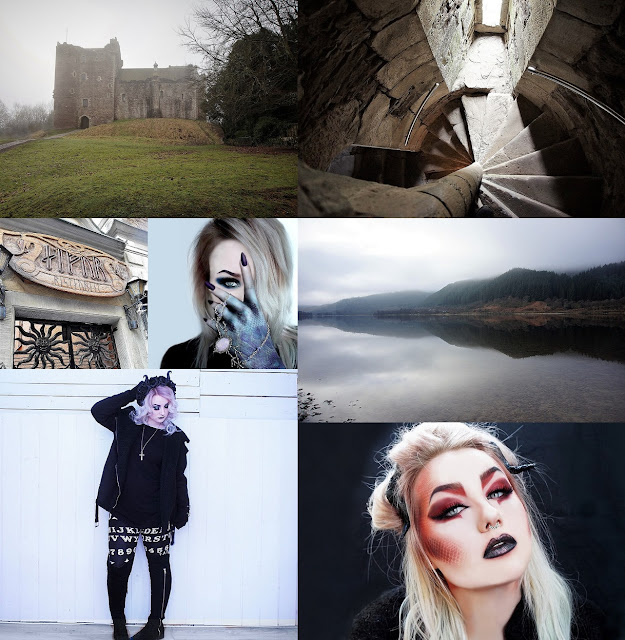 Inspiring style that I have taken influence on a little. Never know what style comes next so I am always interested to see new post. Also nice to see the life beneath the style. 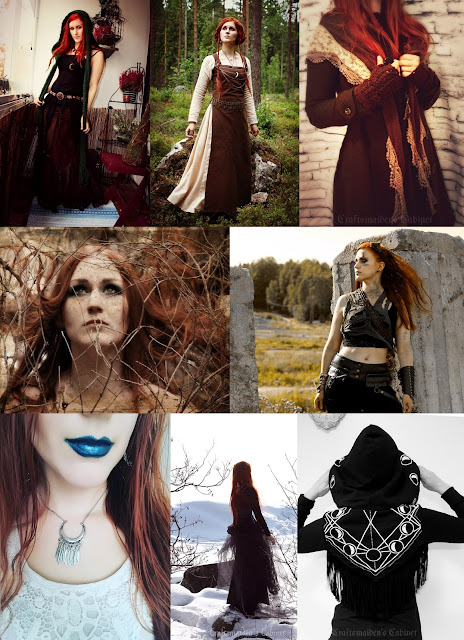 Interesting home with cats, curiosities and bones. Totally one of my ultimate favorite homes ever! Side note: almost all of my bones are from this blogger. 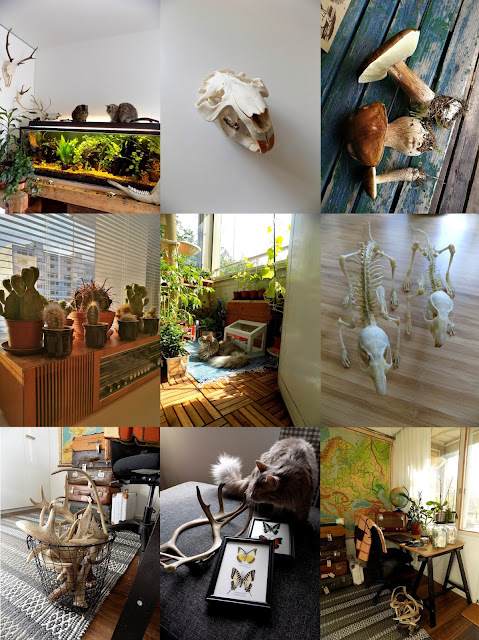 Everything about witchcraft and old beliefs. One of my favorite blogs of all time, love everything witchy (add a lot of hearts here). 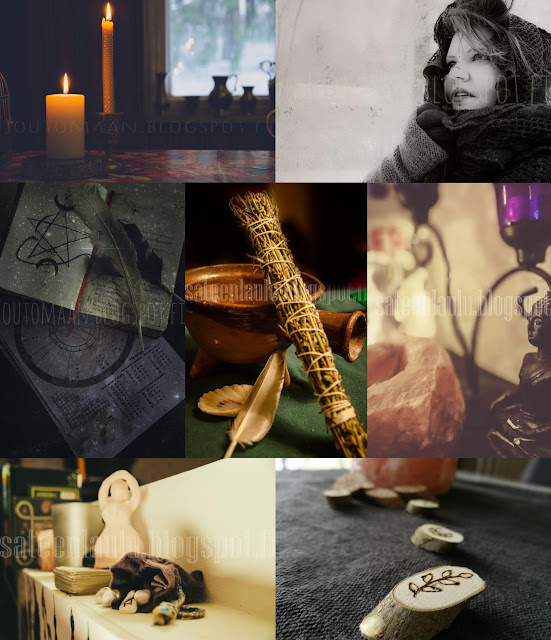 Welcome to tea world with tasty recipes. I got really bad desire to drink tea and have a slice of cake while reading this blog, which is awesome, tells a lot about the blogger. Also love the atmosphere of the pictures and the casual feeling. 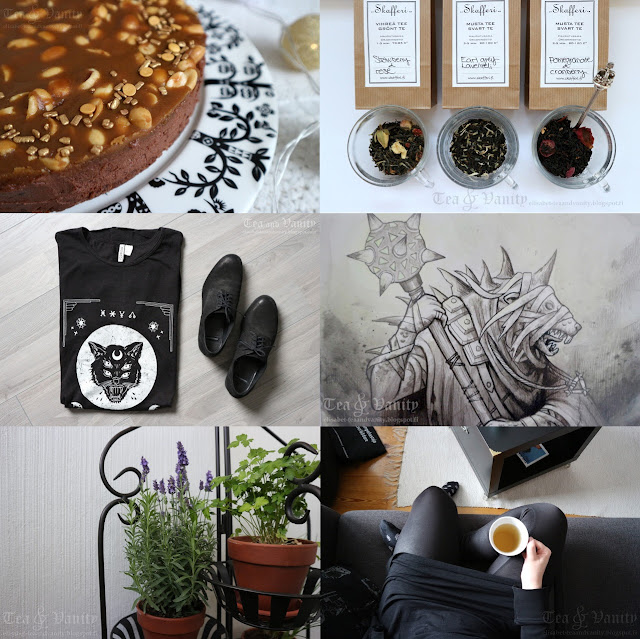 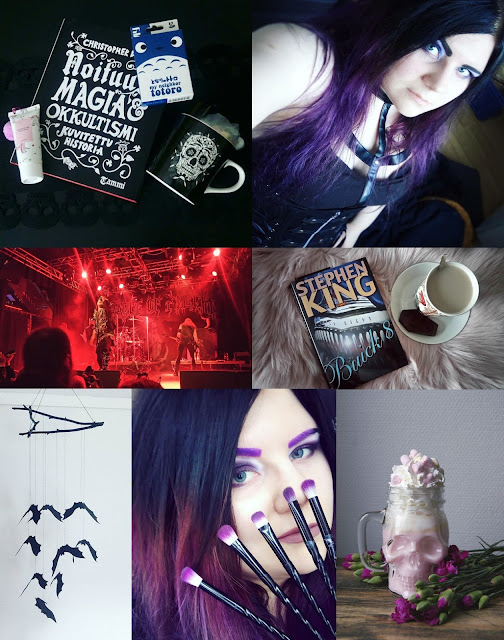 
Asatru (or Ásatrú) is a religion which believes in the ancient Germanic spirits and Gods. It was officially recreated in the 1970s in Iceland, but it´s roots go back many thousands of years. The name comes from two words in a language called Old Norse. It means "faith in the Æsir." The Æsir are the Germanic gods.

A person who practices Asatru is called an Asatruar, and is sometimes referred to as a heathen. If someone wants to talk about two or more followers of Asatru, they would say that they are Asatrufolk. Sometimes Asatru is also called Odinism, Wodinism, Wodanism, Wotanism or Germanic (neo)paganism. 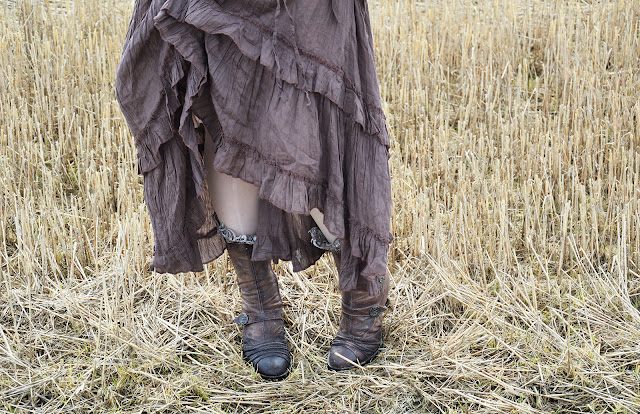 So what Asatru means to me? Well, a lot. Old Gods and beliefs are big part of my life and I am super proud to be Finnish and have heritage as interesting as vikings. I truly take big influence on everything related old religions. But I don´t recall myself Asatruar, I mostly and strongly believe in Finnish old Gods and Goddesses. But if I were, there gladly aren´t actual rules in Asatru, everyone makes it their own. I have also read a bit Prose Edda, which is Icelandic poem collection from the year 1200. The book and it´s stories are pretty big deal for Asatruar, at least I have that feeling after talking anyone who I know is Asatruar. The books are the main sources of medieval skaldic tradition in Iceland and Norse mythology after all. 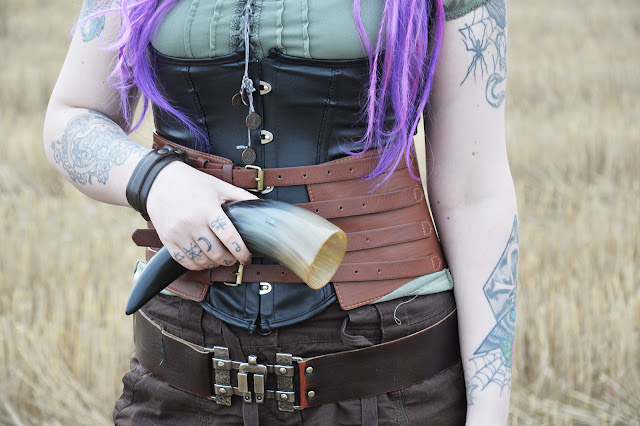 Midgard—is regarded as just one of nine realms, all of which are part of a cosmological world tree called Yggdrasil. Different types of being are believed to inhabit these different realms; for instance, humans live on Midgard, while dwarves live on another realm, elves on another, giants on another, and the divinities on two further realms. Most practitioners believe that this is a poetic or symbolic description of the cosmos, with the different levels representing higher realms beyond the material plane of existence. 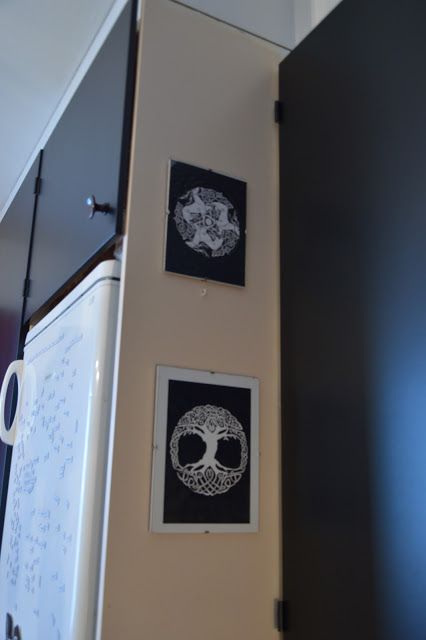 To me, tree of life is very special. How it symbolize everything important to me it also seem make me calm and I think I understand life better thinking about it. Trees altogether are important, I am what you call, a tree hugger. Normally, when I don´t know what to draw I draw tree of life or, Yggrasil. 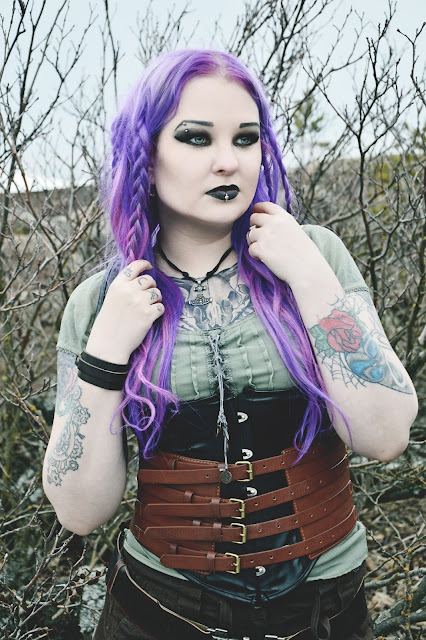 There are also three sisters known as the Norns who sit at the end of the world tree's root. These figures spin wyrd, which refers to the actions and interrelationships of all beings throughout the cosmos. In the community, these three figures are sometimes termed "Past, Present and Future", "Being, Becoming, and Obligation" or "Initiation, Becoming, Unfolding". I really like this because it reminds me also Moira´s from Greek mythology. I have always been fascinated about time and how destiny wrap everybody´s life together. Is there such as destiny? Do you believe it? I personally like more butterfly effect, everything we do effects on everything after that. Life strings all together is interesting thought. 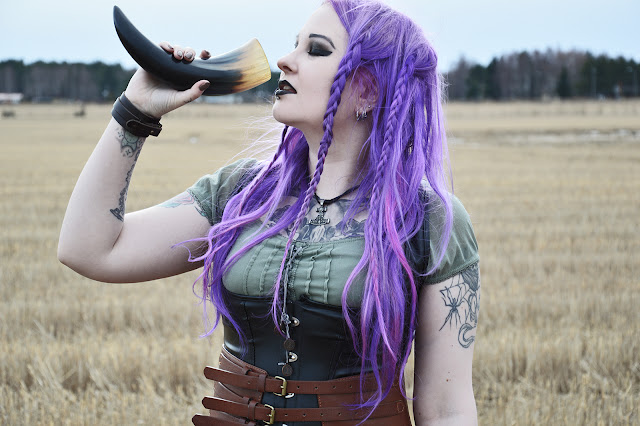 Various Heathen groups adopt the Norse apocalyptic myth of Ragnarök, some even see it as a literal prophecy of future events. Instead, it is often treated as a symbolic warning of the danger that humanity faces if it acts unwisely in relation to both itself and the natural world.
I often like mythologies about end of the world and this adaptation is quite interesting, I recommend to check viking mythology stories, if you are even a bit interested. If I start to write more, this post would be so long... 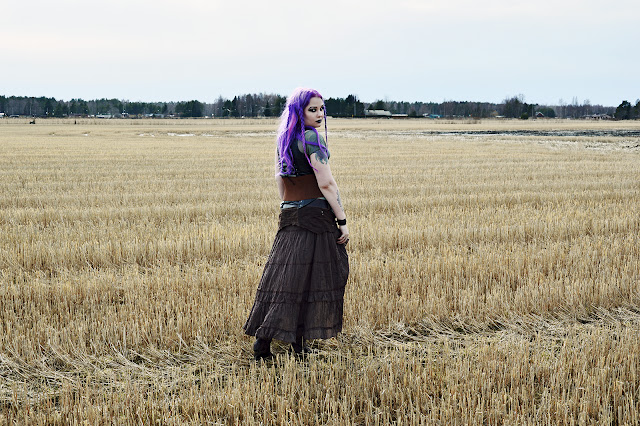 But still one last thing, which I too like. Let´s talk about afterlife. In Icelandic Heathenry, there is no singular dogmatic belief about the afterlife.  It is common to find a belief in four or five souls, two of which survive bodily death: one of these, the hugr, travels to the realm of the ancestors, while the other, the fetch, undergoes a process of reincarnation into a new body. In Heathen belief, there are various realms that the hugr can enter, based in part on the worth of the individual's earthly life; these include the hall of Valhalla, ruled over by Odin, or Sessrúmnir, the hall of Freyja.
I personally believe reincarnation, I will become part of the wind, tree or maybe a mammal. Maybe I will be an ant or just part of everything around. By the way, one of my cats are called Freyja, because in Norse mythology, Freyja is my favorite Goddess.

Well, here is little about Asatru and old Norse beliefs, I just scratched it a bit, there is so much more, but like I said, it would be long if I would write everything I know and I think this is good start for those who doesn´t already know or know just a little. I hope you liked it, next up will be about Astronomy witches!